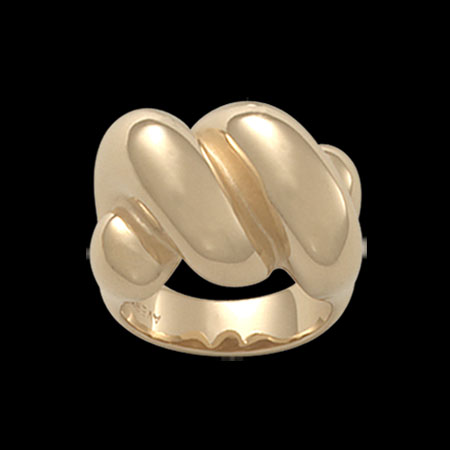 One day Debbie came home after doing a little shopping.  I think she had had lunch with her friends that day.  She walked in with a big smile on her face and said, "Look at my ring."  She was wearing the silver domed ring she had purchased at James Avery.  Debbie always liked shiny things like diamonds, gold, and silver.  About two months went by and Debbie came home again and said, "Look at my ring."  I looked at her ring and responded, "Yes I've seen it before."  "Isn't it so shiny?"  She asked.  "Why, yes it's beautiful" I said.  With a big smile on her face she said, "I got tired of polishing and so I had it dipped in platinum."

Several months went by and Debbie had been out shopping again.  Once again she walked in with a big smile on her face and said, "Look at my ring."  I said, "Honey, you went and bought a gold one?"  With that twinkle in her eye she said, "You know me, if I like it in one color I have to have them all.  I went to James Avery and asked them if they could make one in gold and they told me they would.

Debbie just loved those two rings.  She wore the silver/platinum ring a lot.

When Debbie found out she was terminal she decided she wanted to do something special for the women who made a difference in her life.  So, she got a piece of paper and started writing down some names.  It started with her sisters and her mother and then her daughters Megan and Margaux.  She then began thinking of other women who had influenced her life.  She wanted them to have a special thank you and she decided it would be the sterling Silver Ring.  She called the ring her "Sisterhood" ring.

Debbie only lived for weeks after we found out she was terminal.  Daily she would see one or more of the women who made a difference in her life.  Sometimes she would call her friends and they would come over to the house so she could have some private time with them.  That time usually lasted 30 minutes to an hour at the end of which she would give them a ring.

Unfortunately, Debbie died before she was able to distribute all of her rings.  It was now up to me to finish the job for her.  I needed to go buy more rings.  I went to the local James Avery store at the mall and was informed the ring had been discontinued.  My heart was broken because I knew I would not be able to fulfill Debbie's wishes.

I went to the office and began writing a letter to Mr. James Avery himself.  I actually begged him in the letter not to take the ring out of production.  I included one of the DVDs made with the help of Leanne Taylor and Deb McCaskey and a local production company.  Mr. Avery responded with a hand written note on his own stationery.  He told me he had seen the entire DVD and after reading my letter had made the decision to put the ring back into full production and to restock the stores.  He then told me they had made a decision to rename the ring “The Sisterhood Ring."

After that, the Woodland Hills store in Tulsa, Oklahoma had a write up about Debbie in their display case.  Now each time a ring is purchased a short note is included in the box.

Over the last few months the ring has become very popular and the stores have trouble keeping them in stock.  In October 2007 I was approached by the James Avery Company asking permission to use the story about Debbie and feature the ring in one of their upcoming catalogs.

Debbie's legacy lives on in this ring.  Debbie always strived to make others feel good and help build their self-esteem.  She succeeded in her efforts to do so.  Now many others continue the tradition of the "The Sisterhood Ring".

You can find the ring at James Avery